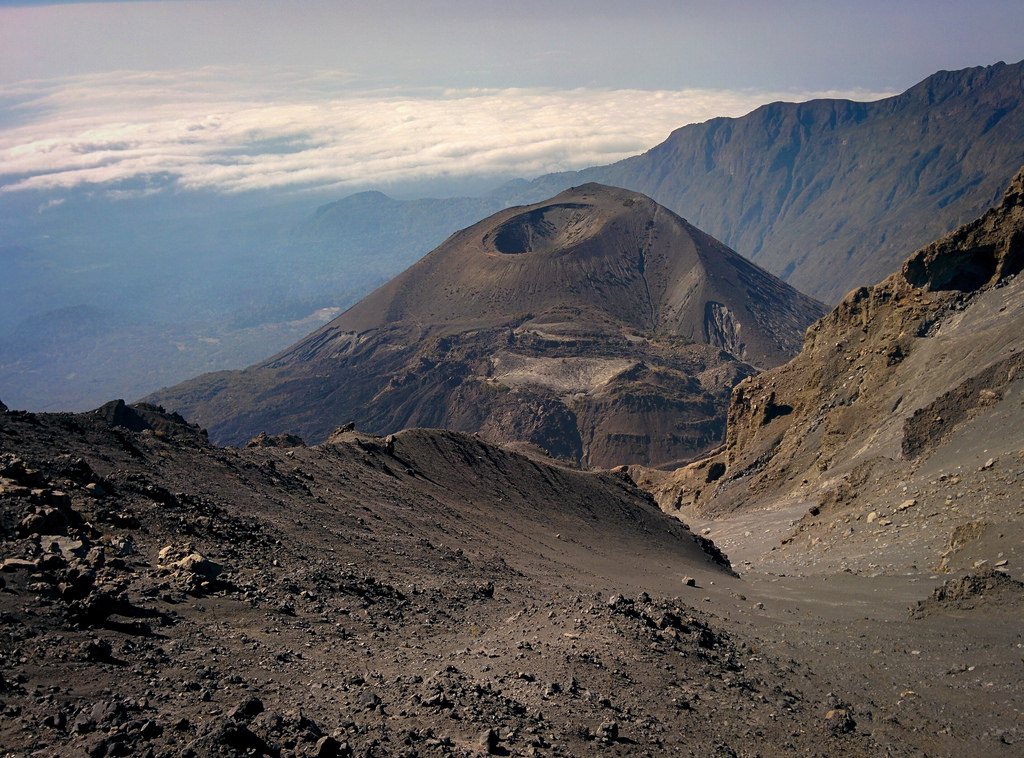 Mount Meru is the first sight you can see when reaching Arusha town. The mountain is with its 4,566 m (14,990 feet) Tanzania’s second highest peak after Kilimanjaro and the fifth highest in Africa. The mountain has two peaks: Meru Summit, the highest point, and Ash Cone, an additional peak inside the crater which was formed after a more recent volcanic activity. On clear days one can see Great Rift Valley and Kitumbeini and Gelai volcanoes in the western part, and in the east its neighbor Mount Kilimanjaro with Kibo and Shira Plateau.

It is the only way up to the summit. You don’t need any technical equipment for the climb but you will need to be prepared for the altitude gain. The best thing you can do is to take your time for proper acclimatization.

The climb offers spectacular views of Mount Kilimanjaro and wildlife on the forested slopes and the summit itself offers an amazing view of small cones and craters, which are probably the results of numerous volcanic activities in the past.

The climb to Mount Meru is a rewarding experience

You first pass through a savannah where you have the possibility to spot buffaloes and giraffes. At the lower slopes of Mount Meru you can find parkland, grassland and a rainforest with red-hot pokers and Spanish moss. The giant heather zone and the moorlands are forested by giant lobelias. Close to the summit you can spot everlasting flowers in this alpine desert. The way up to the summit is through a narrow and barren ridge. At the summit you can have amazing views of the Ash Cone inside the crater. While the best choice to explore Mount Meru is by climbing it up to Meru Summit, you can also spend your time at the mountain and its surrounding with different activities such as a walking safari in the national park, canoeing in the Small Momella Lake, bird watching or even game-viewing.

The wildlife and the birds of this area are amazing

The most prominent among the 400 different bird species on Mount Meru are lanner falcon, Levaillant’s cuckoo and crowned eagle. The animals you can see around the mountain are giraffes, white colobus monkey, buffaloes, elephants, baboons and flamingos around the Momella lakes.

The formation of Mount Meru

It happened after the formation of Great Rift Valley, when million years ago the volcano standing on this area lost its top after a gigantic explosion. This explosion gave Mount Meru its shape of a horseshoe. Mount Meru is still an active volcano with the last smaller eruption in 1910. The first person to climb Mount Meru up to the peak was Dr. Fitz Jaeger in 1904. The local Waarusha people who leave around Mount Meru regard it a sacred place. They sacrifice a bull or sheep every year to the mountain for a rainy season. Mount Meru offers two huts for overnight stays, Miriakamba and Saddle hut. Additionally the Arusha National Park has three campsites, a rest-house and few lodges.

The peak can be ascended in 3 or 4 days on the Momela Route, which is the only way up to the summit. You don’t need any technical equipment for the climb but you will need to be prepared for the altitude gain. You will hike past wildlife, the landscape is spectacular, and sunrise on the summit has Kilimanjaro as the backdrop. Meru is a great preparation hike for climbing Kilimanjaro, or a spectacular trek for those not compelled to do Kilimanjaro. The climb not only offers spectacular views of Mount Kilimanjaro, but also wildlife on the forested slopes and the summit itself offers an amazing view of small cones and craters, which are probably the results of numerous volcanic activities in the past.